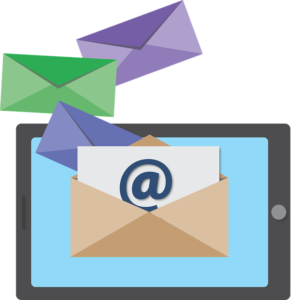 It’s becoming evident that newsletters are a valuable tool for authors to have. Shawn Inmon recently discussed the importance of newsletters, and one of the things he said was, “The reason why is simple: You control how and when you access a mailing list, as opposed to investing everything into working the Amazon or social media algorithms.” That really resonated with me, so I decided it was time for me to take his advice seriously.

I’d read in multiple places that having a giveaway is a nice way to encourage people to sign up for a newsletter, so after some discussion, I bought a Kindle Fire. I decided to advertise for one month, and at the end of that month, I’ll mail the Fire to whichever randomly chosen subscriber wins. (As an aside, Mail Chimp has all sorts of tools to help you build your subscriber list and design your newsletter. See more in Gordon Long’s article about Mailchimp here. )

Once that was decided, I bought social media ads, Tweeted, Facebooked, added sign-up links to the backs of eBooks, and nagged friends and fellow authors to help me spread the word.

At the end of two weeks, I had thirteen subscribers.

I’ve never been convinced that social media, with or without the ads, is effective. Effective for me, I should clarify. It seems to work well for some people. I just don’t happen to be one of them. So I decided to get creative.

The first thing I did was to create a video. (I teach you how to make a trailer in PowerPoint here, but if you don’t have PowerPoint, we have plenty of other how-to video trailer articles here.) It clocked in at 29 seconds, and invited people to sign up for my newsletter and enter to win a chance at a free Kindle Fire. I took it a step further and inserted a direct, clickable link to the sign-up form on my website at the end of the video. RJ Crayton tells us how to do this here. I uploaded the video to Youtube and, of course, posted links. I think I got five views. Three of them may have been mine.

Clearly, I needed a better way to reach people. What if I have a giveaway to help people see my giveaway?

The next morning I went to the Amazon product page for the paperback version of my novel, Appalachian Justice. I scrolled to the bottom of the page, where over on the left, I came across this:

Clicking that took me to the screen below. I decided I wanted a “lucky number” to win, so I checked that box (red arrow below). I decided I would give one paperback away to the 200th entrant (blue arrow below). See where it says “Grow your audience by requiring entrants to”? I decided to require entrants to view my Youtube video before they could enter my paperback giveaway (green arrow below). I clicked the blue “validate” link, and the name of my video popped up. 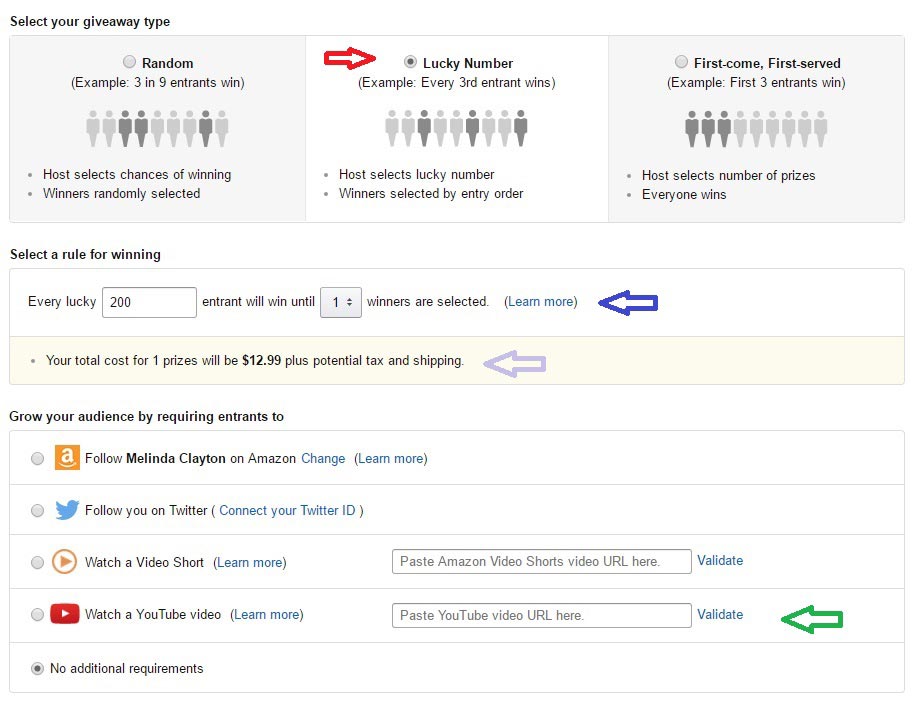 Further down the page, you can set the number of days you want the giveaway to last. I set it for seven. Amazon let me know that the ad would end up costing me the price of my paperback, plus shipping and handling, which all together was right at $19.00 (see purple arrow below). When I was finished, I clicked to the next screen and Amazon told me it would take a few hours to approve the ad, and they would send me an email when it went live.

About three hours later, I received the email and clicked the link to see how my ad looked. This is a screen shot I didn’t think to grab until the contest was over (see photo below). When it was running, there was a line of text above my video telling entrants to watch the video before entering. There was an “enter” button at the bottom of the screen that was grayed out until the video stopped running. 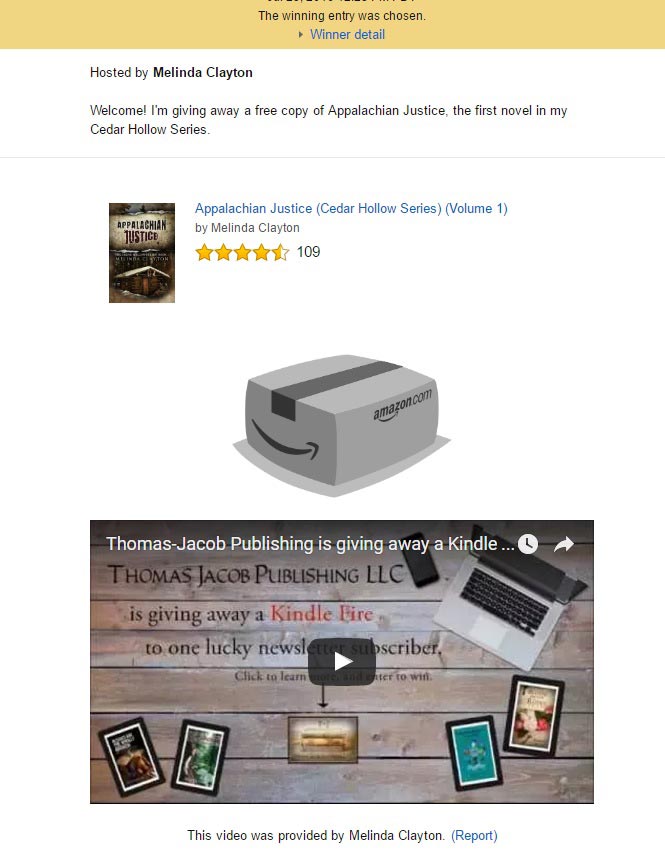 So how did I do? In just over an hour I received an email from Amazon telling me the lucky winner (#200) had been chosen and would receive my paperback. So much for seven days! During that hour, I doubled the number of subscribers I had to my newsletter.

People went so they could enter to win my paperback. They had to view my video first. Some of them actually clicked the link in the video to go to my website and subscribe to the newsletter and enter to win a Kindle Fire.

The numbers still aren’t anything to brag about, but in one hour I achieved what had previously taken two weeks to accomplish – and for a lot less money.

I’ll definitely be doing that again.

Melinda Clayton is the author of the Cedar Hollow series, as well as a self-publishing guide. Clayton has published numerous articles and short stories in various print and online magazines. She has an Ed.D. in Special Education Administration and is a licensed psychotherapist in the states of Florida and Colorado. Lear more about Melinda at her Amazon author page View all posts by Melinda Clayton

27 thoughts on “YouTube and Amazon: Gain Exposure by Using Both”