Amazon rolled out a new advertising option in the last few days and, as with all things Amazon related, it set the author blogosphere abuzz. If you have published books through Amazon’s KDP Select program, when you go to your KDP bookshelf, you should see a link that says “Promote and Advertise.”

If you are interested in giving this new option a whirl, click that button and you will be taken to a page that looks like this:

Click on the “Create an Ad Campaign” button. That will initiate this dark page for a moment. Don’t panic. There are no new account forms for you to fill out.

Then you will be taken to to a page where you can choose which book you want to promote. 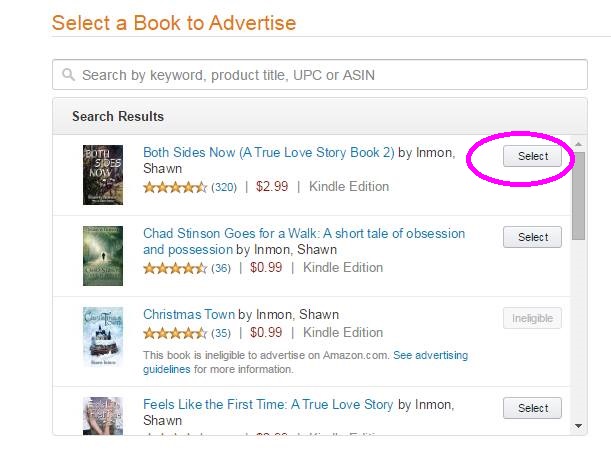 After you select the book, you will go to a page where you are presented with two ways to promote it: by specific product (think: a bestseller that is similar to your book) 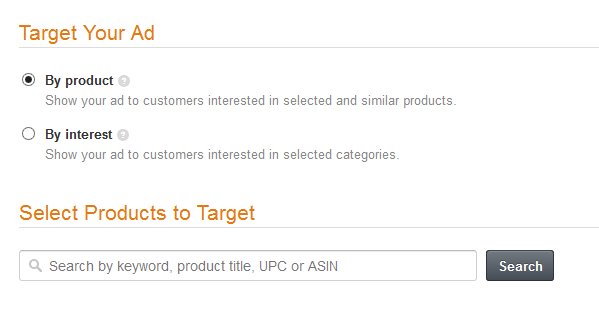 or by interest (think: categories like Thrillers, Memoirs, etc.) 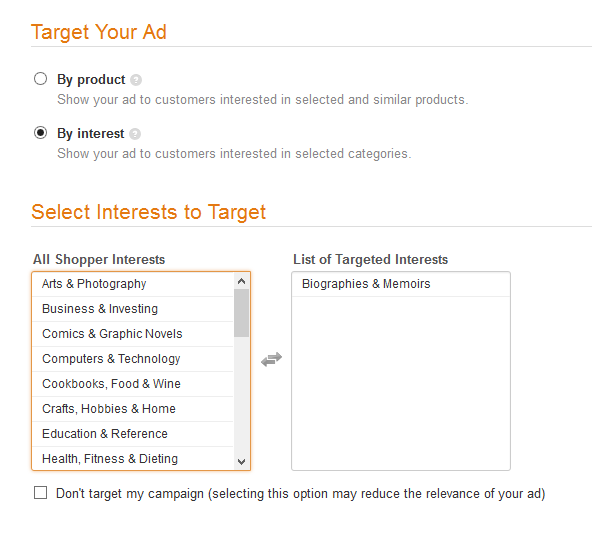 At the bottom of that page, you will be able to name your campaign (helpful if you are running numerous simultaneous campaigns,) set your cost per click, and total budget for the campaign. I’ve heard from some writers that one of the hang-ups with the program is the cost. In order to participate, you have to be willing to commit to spending a minimum of $100 over the life of the campaign. However, if you don’t get enough clicks to use that budget over the sixty days a campaign lasts, you are only charged for what you do use. 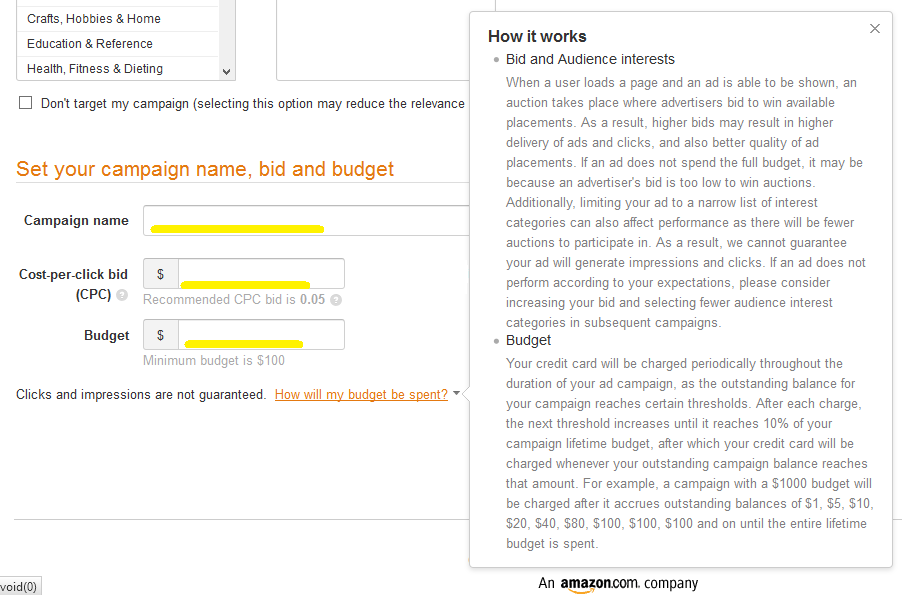 The good news is, you don’t have to design the ad. It’s generated for you automatically. Here’s what the ad will look like for a campaign I just authorized: 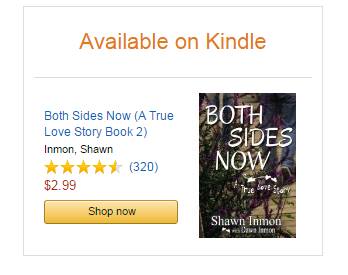 So, that’s the mechanics of how it works. Now, the more important question: Should you use this tool? As with all things, you should make up your own mind, but here’s what I’ve been able to gather in the very early days of this program.

Amazon has been beta testing this for months now. I was not asked to be a beta tester, but several authors I know did participate. Their results, along with other beta tester reports I’ve found online today, were, at best, underwhelming. I saw one post where a writer whose veracity I trust said he had spent $600 in testing the program and had earned back only $28. A good friend of mine said that she never got a single click, so it didn’t cost her anything, but was essentially a waste of time.

Something else to consider is that Amazon isn’t accepting all books that are submitted. That appears to be due to what is on the cover: a visible gun, a partially nude cover model, a pool of blood, all of which have been reportedly turned down for the program. I think Amazon is treading carefully, not wanting an inappropriate image showing up when an eight year old searches for a Thomas the Tank Engine video. I can’t say as I blame them for that, but eliminating guns, blood, and half-naked people will eliminate a huge percentage of the Romance, Thriller, and Horror books out there.

That’s the bad news. I tend to discount the experiences of the beta testers somewhat, as I am not privy to how they set up their campaigns. In order to be successful, I see two key components. 1) You have to set the campaign up so that it qualifies for a lot of potential showings. If you choose a single specific product, but that product has a sales ranking of over 500,000, there aren’t going to be a lot of eyeballs on that page to fight over. 2) The cost per click-thru. For my books (and others I’ve heard about) Amazon recommends a .05 cost per click. Since each time an ad could appear, it is essentially an insta-auction (with the highest cost per click bid automatically the winner) if you bid .02 per click, you’re not likely to get too many potential click-thrus.

I still believe this is potentially a useful tool, and I am putting my money where my belief is. I’ve authorized two $100 campaigns as a test. Since we are at the earliest stage of this, I don’t have any results to report, but I will file a follow up report in 30-60 days here on Indies Unlimited. I am running both a specific product and an interest campaign. The books that I am promoting are both memoirs with a romantic bent, so for one I picked the interest categories of Memoirs and Romance. For the other, I picked three specific books that are good matches for my own book. So, when people search those pages, my own books will potentially appear alongside them.

One way I can see this being a worthwhile tool is for niche non-fiction writers. Let’s say you write NF books about pregnancy. You could set up a campaign and pay for your ad to appear on products that are pregnancy related. If someone is looking at breast pumps or cribs, they might be interested in seeing an ad for a book about post-partum depression.

Another possibility is to help launch a new book. It’s very difficult to get exposure for new releases, as most book sites want to see a specific number of reviews before they will approve your book for an ad. As far as I can tell, although it’s not yet available for pre-orders, it could prove to be a valuable tool for gaining early exposure.

Is it worth putting your book into Select just to participate in this? This early in the game, I’m not sure it is. If I was in the anti-Select camp, this wouldn’t be enough to sway me into exclusivity. However, if you’ve already got one or more titles in Select, I can see where this is worth a try. It takes ten minutes to set it up, so if you don’t get any clicks, you’re not out anything. If, on the other hand, it works, it could end up being a valuable advertising venue.

Shawn Inmon hails from Mossyrock, Washington — the setting for his first two full-length books, Feels Like the First Time and Both Sides Now. His newest release is Rock ‘n Roll Heaven. By day he works in real estate with a side of public speaking. Learn more about Shawn on Facebook or his Author Central page View all posts by Shawn Inmon