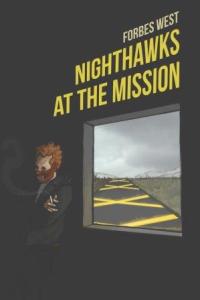 In today’s universe, The Oberon is the last place a settler from the USA can find the American dream alive and well. Thousands of settlers have come to live in this mysterious land on another world accessed only by an energy portal in the South Pacific. Facing a hopeless future and betrayed by her long-time boyfriend, Sarah Orange is one of those who leave the Earth. Quickly she falls in with a group of illegal salvagers that operates at night in the empty ruins. Sarah risks death from both The Oberon’s corporate overseers as well as the indigenous beings who hate the settlers. With her life spinning out of control from drug addiction, Sarah searches for love and money in a world so close to – and yet so different from- our very own. But first, she must survive a terrorist threat that slowly begins to destroy her new homeland.

Nighthawks at the Mission, the science fiction novel by Forbes West, is available at Amazon.com and Amazon UK.

From the name of your protagonist, your evil antagonist, your main and subsidiary characters and minions, your chapter titles (if you use them), right through to the title of your masterpiece – do the actual names matter? They obviously matter to the creator – the author – but do they really matter to the reader, to the general public? In my humble opinion: You bet your life they do!

Names have a certain ring to them, and unless you’re writing something that is deliberately farcical, or really tongue in cheek, like the old James bond movies, with Plenty O’Toole or Pussy Galore, you should use names that don’t immediately snap the reader out of their state of suspended disbelief. END_OF_DOCUMENT_TOKEN_TO_BE_REPLACED