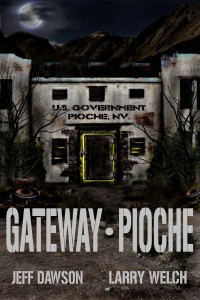 Today we have a sneak peek from the science fiction novel by authors Jeff Dawson and Larry Welch: Gateway: Pioche.

June 2016—Stanford, Ca. Graduation for Muki, Abdul, Larry and Judith. Six years of cramming for finals and pursuing double master’s degrees has finally paid off. It’s time for VEGAS! Instead of enjoying their winnings, they find themselves in a life-threatening pursuit through the sleepy town of Pioche, NV.

What and who they find could unravel truths surrounding the most debated conspiracies of the past—who shot John Fitzgerald Kennedy, what happened to Judas Iscariot and did America really land on the moon in 1969. And, will Judith be able to purge her family’s ties to the Third Reich?

Gateway: Pioche is available through Amazon.com, Smashwords, and Amazon UK.

Here is an excerpt from Gateway: Pioche…

The lights went black. The screen revealed a vast quarry of clay. The sun was beating down on the dry, parched ground. Swirls of dust rose and settled on the ground as the wind blew across the parched landscape. Abdul’s voice broke the solitude. “I was there. I witnessed Jesus Christ calming his disciples as he prepared for his inevitable end. How can one describe these events and be believed? To my friends, I hope upon my return the film I carry will provide the information and knowledge we seek, for I fear my thoughts and recollections would never explain the true essence of the events I’m witnessing.”

The scene changed. Abdul was zooming in on a bedraggled man approaching the largest tree in the grove. As Abdul zoomed in, they could see the man’s garments were torn, and his face was filled with grief. He removed a rope, climbed the tree and tied it around the limb, then secured it around his neck.

As the viewers prepared for the man to fling himself off and die, the auditorium thundered as an undecipherable voice boomed over the speakers. “STOP!” A light fixture broke. Paint peeled from the walls, chairs shook with the sound, and sweat beaded on the foreheads of the group as the temperature in the theater started rising. Skorzenzy frantically tried to adjust the volume setting to low. It wasn’t responding. He shouted into the microphone. His words were drowned out as the voice continued.

“WHAT ARE YOU DOING?” He tried to switch off the projector with no luck. He attempted to unplug the power feed and was met with a strong electrical shock. He feared for himself and the others what the rest of the film would reveal. He rushed down the stairs. Everyone but Abdul was covering their ears. Skorzenzy yelled for them to leave the auditorium immediately for their own safety. Larry and Judith jumped up as he grabbed their arms and pointed at the doors. Abdul calmly stood as if nothing were happening.

“Abdul, we must leave immediately,” pleaded Muki. Larry and Judith were pushing on the bar release. The door refused to budge. “Abdul, Abdul, please come with us!” She looked back at her friends as they continued banging and kicking at the door in an effort to force it open. Nothing. Despite their best efforts, the door refused to yield. “Abdul, help us. Please, help us escape.”

He looked at his friends—his brother, his sisters. His words broke through the thunderous noise from the speaker. “Relax my friends. Calm your fears and sit. We are safe. Please sit down and watch.” Reluctantly, they moved back into the theater and sat down.

The dialogue continued between Judas and the unseen force as they slowly retook their seats.

Another voice erupted over the quarry. “He is mine!”

The group gasped at the sight appearing before their eyes.

“Abdul, what the hell is going on?” screamed Judith.

“A battle between Heaven and Hell.”