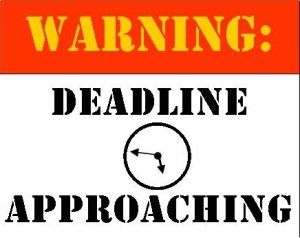 “I love deadlines. I like the whooshing sound they make as they fly by.” — Douglas Adams

Douglas Adams’ quote regarding deadlines is one of my favorites—not because I love deadlines—oh, no certainly not—but because he was making fun of the idea that a writer is actually expected to adhere to one.

Now yeah, I’m an indie writer, so technically my deadlines for getting a book up are self-imposed and artificial. Yet, I still make them, still push myself to finish the book, the blurb, the cover, what have you. Deadlines can be both carrot and stick. Carrot, because once I’ve finished the book and cobbled together all the necessary components (book cover, editing, marketing, etc.)Yay! I’ll have another book out there for folks to read! Stick because if a book takes longer than I anticipated and I know I’m going to miss a deadline, my stress level rises and I tend to beat myself up.

This recently happened after several readers innocently asked me when the next Kate Jones thriller would be available. At the time I assumed a few things—not the least of which was uninterrupted time to write and a clear idea of the plot—so I gave them a ballpark figure of sometime in January, beginning of February at the latest.

And, as the quote above implies, the deadline whooshed by. Actually, it made that screaming sound like when a cartoon character turbos past the other characters on a slingshot thingy. At first I told myself it would only be a few more weeks and I’d be on the downhill slide, close to the finish. The problem being I had been trying to write a story that wasn’t working. Usually I’m pretty good at catching that kind of thing. It’s not difficult for me to delete large sections of a story if it goes off the rails. Kill those darlings, right?

But this time, since I made a promise to a group of readers (IMO one of the most important and gratifying parts of being a writer is having folks who want to read your stuff) I pushed myself to write what turned out to be the wrong book.

I’d been trying to write what had become a mystery with plenty of dead bodies and suspense, but was having a hard time with the plot. The story was interesting enough, but I should have stopped when I began to second-guess myself on the main turning points, including the ending. Usually, if a book’s going well I can power through the first draft with no problem, but this didn’t feel right. Not exactly writer’s block, but close enough.

Then I was presented with the opportunity to travel to the Yucatan. Since I love to travel I put the novel on hold, intending to long-hand ideas as I came up with them on the trip, then plow back into the story when I got back. A little later than I wanted, but still workable.

Apparently, the writing gods had other plans.

The trip to the Yucatan Peninsula was life-changing, in more ways than one. Of everything I did while there, the chance to explore Mayan ruins and meet not one, but two Mayan shamans had the greatest impact on my writer brain. The mystery I’d been spending so much time on evaporated and in its place was the perfect way to show Kate’s character arc. It wasn’t even close to the book I’d been writing for months.

You see my predicament.

When I got back from the trip I took one look at my work in progress and realized I wouldn’t be able to save more than a few scenes if I was going to write the story I now had in mind. Yes, I’m easily distracted by bright, shiny things (especially on the internet when I should be writing), and yes, I really, REALLY wanted to be able to deliver the book at least close to when I said I would, but I couldn’t bring myself to continue with the old story.

After an attempt at rewriting failed miserably, I opened a new Word document and wrote the first scene of the new book. It flowed. Then I continued with the second scene and it flowed, too. I’m now close to being finished and, with one small exception, the rest of the story has appeared as I needed it. When I talk about the plot to whoever will listen I get excited. I can’t wait to finish the scene I’m working on so I can write the next one. The characters are alive and the dialogue is easy. It’s working.

My hope is that eventually I’ll become much better at predicting when I’ll be done with a book, or at least remember to be much less specific in my answers when asked. I want to deliver a quality story worthy of a reader’s attention, not just slap something up on Amazon and call it good. Sometimes you start off in the wrong direction and you just have to backtrack, no matter how long it takes.

Next time someone asks me when the next book will be out, I’m pleading the fifth.

DV Berkom grew up in the Midwest region of the US, received her BA in Political Science from the University of Minnesota and promptly moved to Mexico to live on a sailboat. Several years and at least a dozen moves later, she now lives outside of Seattle, Washington with her sweetheart Mark, an ex-chef-turned-contractor, and writes in the male point of view whenever she gets a chance. Indies Unlimited: https://www.indiesunlimited.com/author/d-v-berkom/ Amazon US author page link: http://www.amazon.com/DV-Berkom/e/B004EVOYH6 Website: www.dvberkom.com View all posts by D.V. Berkom