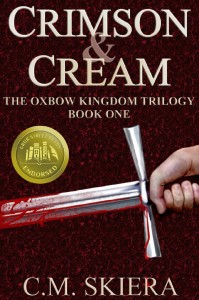 Crimson & Cream recounts an unlucky orphan boy’s adventurous tale of flight and discovery as he unravels his tortured past while securing his tenuous future. The murder of Eadriel and Elvar’s parents forfeited their birthright and sent them fleeing for their lives. The fugitive twin brothers were adopted by an underground orphan gang. During a risky foray, a sentry chased the twin intruders into an unfamiliar cavern. Lost underground, they encounter a strange beast that changes their lives forever, and starts a harrowing journey for survival.

And now, an excerpt from Crimson & Cream:

This night, Jetsam found the poor mass of humanity huddled in a cluttered dead-end street, sleeping among the refuse that worked its way to the edges of town. A chill ran down his spine as he observed the collection of hobos, itinerants, and beggars. The attire of these desperate souls was even more ragged than his own, and their faces were gaunt and lifeless. The smell of cheap wine and feces weighed strong upon the breeze.

Despite knowing they were scavengers and thieves like himself, the young urchin felt no kinship. Without sympathy, he swore he wouldn’t end up like them.

At this time of night, most of the vagrants were sleeping, wedged under landings or curled up against buildings. A few men surrounded a low fire, murmuring. Scrutinizing them, Jetsam realized he wouldn’t know a gypsy if he saw one.

Quick as a whip, a cold, bony hand wrapped itself around Jetsam’s arm. Over his shoulder, Jetsam spotted a haggard face. The wrinkled visage was attached to a hairy head, hovering ominously on top a lanky body.

“What ye doin’ hither runt?” the man snapped. “Not plannin’ on stealin’ from these folk, are ye?” Before Jetsam could reply, his accuser shook him violently. Jetsam squirmed and yanked his arm, but the big hand held firm.

Lifting the waif, the derelict leaned closer, his putrid breath stinging Jetsam’s nostrils. The boy’s toes scraped the urine-stained cobblestone. His arm felt ready to pop from his shoulder.

“Mayhaps we’ll see what the runt gots on him?” the drifter replied. With his free arm, Jetsam instinctively grabbed his pouch, holding his treasured scroll case.

“Got yerself a pouch, runt?” A second palm clasped over Jetsam’s hand and the bag. The large hand tried to pry the purse from the small one, all the while holding the captive in the air. Jetsam tried to turn away from the intruding paw, but the thief twisted him back.

“No!” Jetsam shouted, feeling the long calloused fingers prying under his firm grip. The urchin felt his pouch slipping away. He resisted crying. Everything he ever had was always taken from him.

In desperation, he lunged and bit the hairy rough hand holding his arm. His teeth broke the salty, dirty skin. He tasted blood.

With a howl, the angry hoodlum yanked his arm away from the belt-bag and swatted Jetsam across the face. The boy’s head snapped back, his mouth stinging. The thief’s vicious smack reddened Jetsam’s cheek.

Despite the bite, the rogue’s grip on Jetsam’s arm held firm. The waif still dangled in the air.

Once again, the knuckled hand shot for the juvenile’s pouch. Before the thief reached the bag, a solitary voice rang out.