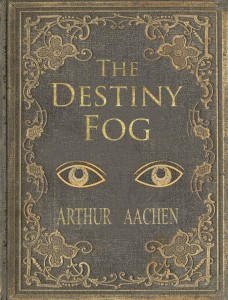 Borne and Trieste come from radically different backgrounds, on a world shaped by mysterious entities known as the Guardians. These guides established a stable and prosperous path for humanity to follow, but are now gone, and the world faces its greatest crisis in history—a catastrophic volcanic eruption that leads to famine, disease, and war. Borne is wounded on the field of battle and struggles to survive. Trieste, torn in multiple directions, must choose between following her heart and following her sense of duty. And the leading adherents of the Guardians struggle to keep global society from collapsing entirely.

The Destiny Fog is available through Amazon.com, Barnes & Noble and other online stores.

Here is an excerpt from The Destiny Fog:

The sky was dark grey and overcast as Borne’s unit set out shortly after dawn. The trees were dark, colorless silhouettes. The sun, only a few degrees over the ridge to the north, shone as a diffuse blob no brighter than the moon. Only the snow was bright enough to see by, reflecting the pale light of the feeble sun.

The whole Second Group, over 5,000 men and women, was headed up the hills to the south of the valley, to clear out the enemy forces that had been harassing Fifth Legion over the past month. Borne had no idea what strategy they were following, but that was what brigadiers and generals were for. His unit, the First Unit of the First Detachment, seemed to be in the center of the Group, with the Second Detachment to the west and the Third to the east. As he walked, following Sgt. Krint and the footprints of the Second Squad, Borne exhaled wispy clouds into the frigid air.

The sky grew a lighter shade of grey as they approached the stream. Looked like more snow on the way, but the legion’s meteorologist must not have forecast anything worth calling off the attack. The tree silhouettes resolved into greens and browns.

The hills, which started steep, and then got steeper, were covered with tall conifers. Beyond, Borne could see tall, rugged mountains, the Gerincre range. He saw no signs of movement on the hills except for birds circling overhead. The birds were too far away to see clearly, but if they were ravens… shoot them and make a lot of noise, or risk letting them get close?

The stream, whose name no one in the squad seemed to know, was about fifteen meters wide. Borne would have called it a river. It was too deep and fast flowing to wade across, but engineers had laid prefabricated steel and wood bridges across in places. First Unit crossed a bridge laid upstream of a bend, and clambered up the opposite bank.

The snow on the hillside was not very thick for the most part, easily traversable with just boots on. Dead grass protruded from its surface. Sixth Squad, in a spearhead formation with Sgt. Krint in front, followed Second Squad, with others of their unit on the flanks or behind. They followed a drainage swale uphill. Because Borne was accustomed to mountainous terrain, he was in the front of the pack, just five meters behind Sgt. Krint, with the other seven squaddies behind him or to the sides.

Borne wondered what the day would bring. Contact with the enemy? An all-out battle? Harassment by a few snipers? Or the usual long patrol with nothing to show for it except tired feet? That would be fine with him. But with the entire Second Group advancing, he was sure the commanders wouldn’t be satisfied until they had a nice battle on their hands.